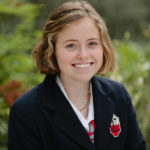 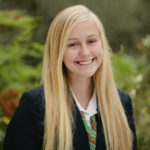 Geneva has named its 2019 Valedictorian and Salutatorian. These graduating seniors will deliver addresses at Commencement in May.

Eleanor Galbreath, daughter of Autumn Dawn and David Galbreath of Fair Oaks Ranch, earned the distinction as Geneva’s 2019 Valedictorian. Galbreath has been involved in drama and music through theater productions at Geneva, Boerne Community Theater and various other places. She starred as Millie in Geneva’s musical production of “Thoroughly Modern Millie” last fall. She loves to write and plans to study writing and theater at a university yet to be determined.

Jacqueline Knox, daughter of Diana and Coby Knox of Boerne, was named Salutatorian. Knox is editor-in-chief of the Geneva high school magazine called Geneva Quarterly, a member Geneva’s TAPPS State Championship track and field team in 2016 and 2017 and is the founder and president of the Geneva Spirit Club. She also climbed to the summit of Mount Kilimanjaro in Tanzania. She plans to study journalism at either The University of Texas at Austin or The University of North Carolina at Chapel Hill.