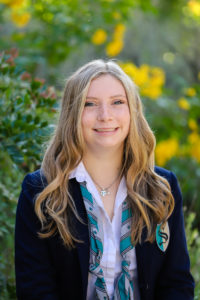 What is the most influential book you have read besides the Bible? Why?
Silence was an influential book for me. It really conveyed what it means to be a Christian throughout numerous hardships and served as a good reminder that God’s presence is never absent.

What is your favorite or funniest moment at Geneva?
My favorite moment at Geneva was probably the lip sync battles between the teachers my freshman year. They went all out, and it was hilarious.

What will you miss most when you leave Geneva?
I will definitely miss the Geneva community. It will be difficult to leave the group of people that have played such an impactful role in my life for the last six years. I am grateful to be surrounded by people that make saying goodbye so hard.

Who has influenced you most while at Geneva, How?
Mr. Tye was definitely the most influential person at Geneva for me. I have so much to thank him for and he was also a constant support throughout my high school years.

What about Geneva do you hope never changes?
I hope the close tight-knit Geneva community will always stay the same.