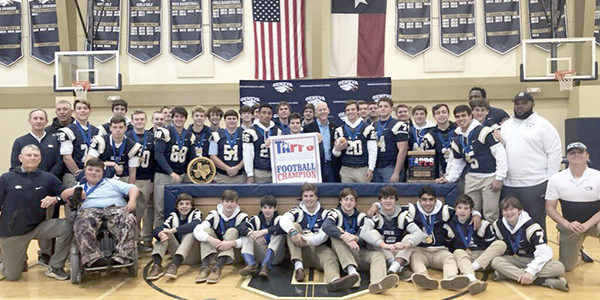 Boerne Mayor Tim Handren proclaimed December 12, 2019 as GENEVA EAGLES DAY as he came to campus to honor the Eagles’ Football Team and applaud them for winning the TAPPS Division III State Championship.

“I continue to be very proud to wear this Geneva sweatshirt (which he said he’s worn for 20 years). What I love most about wearing it is that I know who you are and Who you honor. Today, the One you honor is taking a moment to remind you that He is honoring you as you are recognized by your community. Congratulations for a job well done! Enjoy this day!” Fowler said.

In addition, the Athletic Department released the 2019 TAPPS end-of-season football individual awards today. Congratulations to these players for their outstanding achievement and what their efforts added to the team.

*These students were recognized for their excellence in the classroom as well as in their sport. To earn this award, students must be a junior or senior, have at least a 90 cumulative grade point average and be selected to at least Second Team All-District in their respective sport.