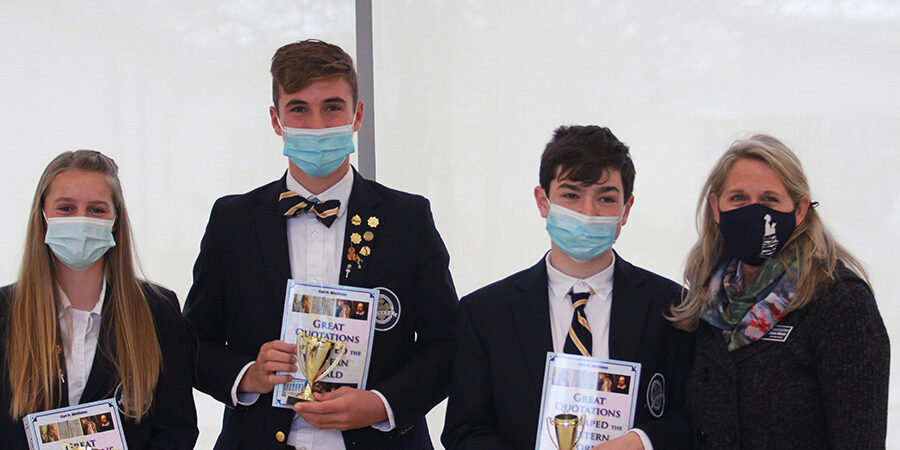 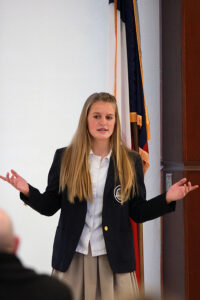 The Eighth Grade Oratory Contest is a highlight of Geneva’s Logic School experience. This competition began in 2007 and has become a tradition in which each student memorizes a piece from a selection of historic poems and speeches and delivers his prepared recitation in front of a panel of judges. It is a precursor to the Senior Thesis which students present at the culmination of their final year at Geneva School of Boerne.

After six weeks of practicing and honing their speaking skills, all 57 eighth graders presented either a historical speech or poem in front of their peers, parents, faculty and judges during the preliminary round of Geneva’s Eighth Grade Oratory Contest. From this, the top 11 speakers advanced to the final round of competition which was held on Monday in Geneva’s Lyceum.

First place was awarded to Kate Friesenhahn for her delivery of “A Woman’s Right to Vote by Susan B. Anthony. Jake Roberson was second with his recitation of Robert F Kennedy’s speech “A Tiny Ripple of Hope.” Eli McClain earned third place for his delivery of a “You Do Your Worst, and We Will Do Our Best” from Winston Churchill. Other finalists were Victoria Allen, Jacob Goodman, Jack Walker Harden, Maegan Riebel, Hannah Reyes, Kailey Stringfellow, Rachel Troyer and John Walter.

“Ultimately, our hope is that memorization of these speeches and poems will plant great words in the minds of students so they can see the power of positive persuasive speaking, helping them grow as disciples of our Savior Jesus Christ. This process equips and empowers them to go out into the world prepared to speak boldly for the cause of His Kingdom,” Logic School teacher Debbie Wheeler said.