What is the most influential book you have read besides the Bible? Why? 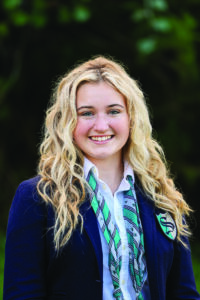 Probably my favorite book we read at Geneva, but maybe The Giver. I think it just opened my eyes to not blindly follow things or be complacent when someone is doing something that is wrong.

What is your favorite or funniest moment at Geneva?
There’s a lot. I love Friday night lights and winning state in cheer and football was really huge my freshmen year. That’s something I’ll never forget. Funniest would probably be just any given moment in Magazine my freshmen year, specifically because of Anson Eggerss and Luke Bower. One funny moment in art was during my sophomore year. The class that day was pretty small with only 4-5 people in it and were all peacefully working with our headphones in until Mrs. Lester loudly asks, “Where’s my alcohol.” Austin and I looked at each other and were trying not to laugh for a solid couple minutes and she continued to say things like, “Have you seen my alcohol?” or “Ugh I need my alcohol.” She was talking about rubbing alcohol that we can use with different mediums like pastels, but it definitely caught us off guard.

What will you miss most when you leave Geneva?
My teachers. I’ve had some of them for a long time and some for only a year, but these people have really shaped who I am and who I’m becoming. I’ve had Mrs. Lester since grammar school and even though I have a love and passion for art, I honestly would not take the class if it were taught by anyone other than her. I love her. I will also miss the magazine and cheerleading. The Quarterly has been one of my favorite parts of Geneva and showed me new depths and ways to express my art. Also having cheered since 7th grade, I’ve been with a lot of the same girls and Coach Jonas for a while. I will miss seeing the cheer team and coach and the light that they bring to my life.

Who has influenced you most while at Geneva? How?
Oh goodness there’s quite a few. I’ve been at geneva since kindergarten so I’ve had lots of teachers here. I’d have to say it’s mainly been highschool teachers who have influenced me most. Specifically Mrs. Lester, Mrs. Ryden, Mrs. Hammock, Mrs. Greenlees, and Coach Jonas. Maybe Mrs. Greenlees because she showed me that I actually really enjoy math and it’s one of my best subjects. I used to really struggle with math and get really anxious about it in grammar school (mainly the mad minute tests) and thought I hated math. Turns out I love math and it’s something I actually enjoy doing. She’s also just someone I really look up to. Someone who can joke around with you, but is compassionate and checks in on her students. She doesn’t let things slide and I really have a lot of respect for her. Mrs. Ward has also been a huge influence as she really can do it all and she’s someone who has really been there for me in some of my darkest hours.

How would you encourage a Geneva kindergartener to persevere in school?
That the timed “mad minute” drills do not define whether or not you are good at math haha. I would say that there’s definitely going to be challenges, but rise to the occasion and face them rather than turn away or try to ignore them. Also always give things your best effort, but grades do not define you.

What about Geneva do you hope never changes?
I hope the bond between student and teacher/coach never changes. I think it’s something that really sets us apart from other places. I also hope that the AIM program stays strong. I think bonding with younger kids at Geneva is really important. As someone who’s been here for so long, I really remember the AIM buddies that showed up and had fun with us and I’m glad that I get to return the favor for some other kids.