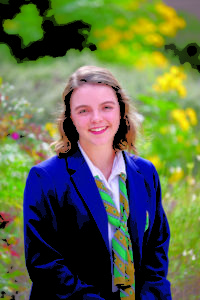 What is the most influential book you have read besides the Bible? Why?
The most influential book I have read has been Boethius’ The Consolation of Philosophy. The reason I choose this book is because it was one of the first books we read that dealt with one person’s inner struggle about life. The discussions in class were also very vibrant and enjoyable because there were many different views and theories. I still look back on that book and remember all of Mr. Southwick’s funny analogies about the wheel of fortune.

What is your favorite or funniest moment at Geneva?
One of my favorite memories is when Joseph in Mr. Harrild’s Bible class was confused on which version we were supposed to have and points to McLain’s Bible and says “I think he has the wrong Bible, he has The Holy Bible…” and the entire class erupted into laughter. Sorry Joseph.

What will you miss most when you leave Geneva?
I will miss seeing everyone I have known for 13 years every day.

Who has influenced you most while at Geneva? How?
I don’t think I could ever pick one person that has influenced me most during the time I have been here; it has definitely been a group effort. If I had to choose one influential person though it would probably have to be Mrs. Ryden since I have practically lived in her room since seventh grade. She has helped me to learn and understand what I want and who I want to be, by guiding me in the classroom, devos and in magazine.

How would you encourage a Geneva kindergartner to persevere in school?
I would say to the kindergarten students that even though your classmates have become family and sometimes drive you crazy, don’t take them for granted because one day you won’t be forced to see them every day, but you will want to.

What about Geneva do you hope never changes?
I hope that the dynamic between students and teachers, never changes.