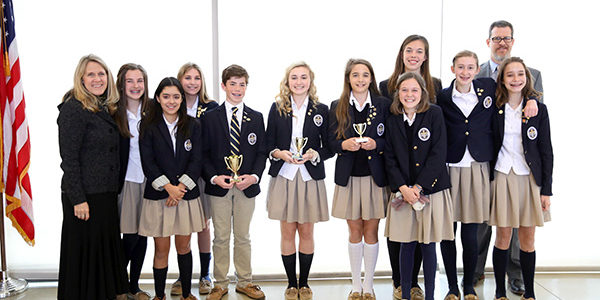 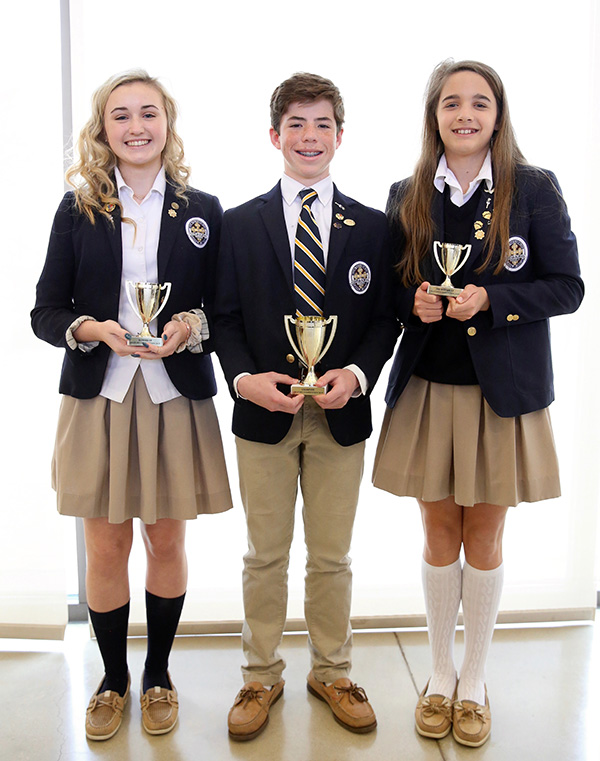 The Eighth Grade Oratory Contest is a highlight of Geneva’s Logic School experience. This competition has become a tradition in which each student memorizes a piece from a selection of historic poems and speeches and delivers his prepared recitation in front of a panel of judges.

After six weeks of practicing and honing their speaking skills, all 57 eighth graders presented either a historical speech or poem in front of their peers, parents, faculty and judges during the preliminary round of Geneva’s Eighth Grade Oratory Contest. From this, the top 10 speakers advanced to the final round of competition which was held on Monday, March 4, in Geneva’s Lyceum.

First place was awarded to George Viña for his delivery of Martin Luther King Jr.’s 1968 “I’ve Been to the Mountain Top” speech. Sophia Baldwin was second with her recitation of Condoleeza Rice’s address at the 2012 Republican National Convention. Sloane Burkholder earned third place for her delivery of Lady Astor’s speech to the House of Commons in 1920. Other finalists were Mattie Sue Arnold, Ava Ayers, Avery Eggerss, Karynn Garrow, Mary Kate Mitchell, Danie Quitadamo and Callie Zuniga.

“The Oratory competition mirrors the classical ideal and provides a structured opportunity for students to expand and grow as learners and future leaders. At Geneva, we desire for our students to be well-spoken and thoughtful individuals capable of speaking on a wide variety of topics. Oratory directly prepares them to not only speak to large audiences, but to do so with confidence, eloquence, empathy and effectiveness,” Logic School Headmaster Jeff Jones said.