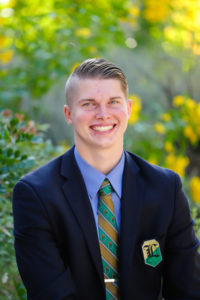 What is your favorite or funniest moment at Geneva?
My favorite moment at Geneva would be eating a Bison Burger and chicken and waffles during a band competition at Waco for my Sophomore year. Everyone around the table kept on cheering me on to eat it as fast as I could. I ended up eating both meals under five minutes each. After accomplishing that, I felt sick, but it was all worth it. Then I took another burger from someone’s plate as a nice evening snack for later.

What will you miss most when you leave Geneva?
When I leave Geneva, I will miss the teachers the most. The teachers here are phenomenal. They care about you and want you to become the best version of yourself. Furthermore, they devote so much of their time to teaching you concepts and how to think critically for yourself. However, the best part about the teachers here is that you can be friends with them. If you are ever struggling with something personal, they are here for you. They value you as a person much more than your academic success.

Who has influenced you most while at Geneva, How?
The person that has influenced me the most at Geneva would have to be Mr. Poole. When I came here sophomore year, I did not previously have any teachers who taught classes based on a Christian worldview. That year, I learned so much about how Christians ought to live by studying different texts and discovering the answers to those books’ moral and philosophical questions. Furthermore, he chose to make his classes engaging by having discussions rather than making us memorize facts for a test. Mr. Poole has forever influenced my view of education. Now I know that learning can be fascinating if it is taught in a way that focuses on having a real Christian worldview application.

What does being a Geneva student mean to you?
To me, a Geneva student is a person who knows how to think for themselves. They can analyze things and relate them to topics in lively discussions. They can be well-rounded because they can take many different classes and electives. Lastly, they know how to stand up for Christianity in debates and discussions.

How would you encourage a Geneva kindergartner to persevere?
Even though I haven’t been at Geneva since kindergarten, I would tell them that high school is fun at Geneva, so persevere through school even if you don’t like it at the moment because every year it will get better.

What about Geneva do you hope never changes?
The thing I hope Geneva never changes is the friendly atmosphere and Christian principles. When I first came here, I was so surprised at how friendly everyone was to each other and how everyone said hi to me. I could really see the light of Christ flowing through so many of the students and teachers here. I hope that Geneva continues to uphold these values in the future because it really does positively affect the students and teachers that go here.