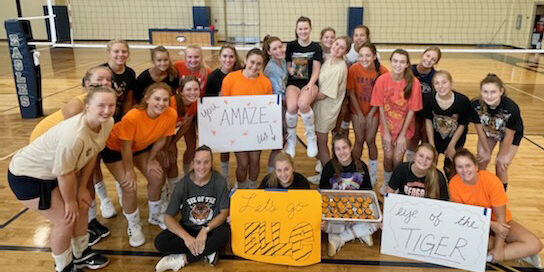 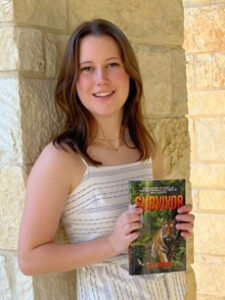 Not many folks can say they have written a book, much less a high school student. But Geneva senior Elle Nicholson can add the unique title of “published author” to her growing list of accomplishments.

Elle began writing her newly published novel for 8 to 12-year-olds called “Survivor,” when she herself was an 11-year-old student at Geneva. She spent about two years writing the first full draft of this novel and another three revising and editing it. The entire process took six years. She said she wrote it because she wanted to make a positive difference in the world.

“The impetus for writing the book was my love of tigers and the sad reality that they are a critically endangered species. I feared tigers would someday go extinct, so I sought to spark change by creating a story that would educate kids on the danger humans pose to tigers. My goal has always been to start a conversation about how humans can mitigate the dangers tigers face and hopefully help the species thrive once more,” Elle said.

“I originally came up with the basic premise for the book in fifth grade and wrote it as a creative short story assignment. When working on the paper, I quickly realized this was a story that needed to be told. I’ve always loved writing stories, so I viewed the task as an exciting challenge,” she said.

“Survivor” is an adventure tale of three tiger cubs who struggle to survive in the wild and learn to overcome hardship as they grow up. The cubs wrestle with their respective destinies, develop close ties of family and friendship and realize the true meaning of love and sacrifice. Elle’s passion about protecting tigers is evident in this novel.

“The underlying theme is a critique of humanity’s exploitative, or at best apathetic, attitude towards tigers. Most of the plot is driven by human interference to disastrous effect. The novel ends on a hopeful note, though, as the hero realizes mankind can save his species by changing the way we treat tigers. I intend that message to be the biggest takeaway for readers,” Elle said.

Elle said the writing and publishing process taught her life skills such as how to edit, how to work with a company, and now, how to promote her work.

“I gradually learned the value of hard work and determination. It would have been so easy to give up somewhere along the way, and at times it seemed tempting, but I’m so glad I decided to see this through. Envisioning my goal and reminding myself why I was writing in the first place usually helped me get in the right mindset,” Elle said.

“The most difficult thing about writing a novel was not so much the actual writing of the novel, but rather my struggle with the fear of failure. I was afraid no publisher would take me seriously. Thankfully, I didn’t give up, and it all worked out in the end!”

“It feels a bit surreal to be a published author after all these years of dreaming about it. I am incredibly excited and feel lucky to get to share my work with the world! The process of getting published was at first long and difficult, mainly because of my age. Finding a publisher willing to work with an inexperienced, agentless teenager was no easy task. It took me a few rounds of inquiries before I landed my contract,” she said.

Elle said she hasn’t decided yet if she’ll write another book yet.

“When I was younger, I’d planned to make “Survivor” into a series, but I won’t do that unless I feel there’s more of a story to tell there. I wouldn’t be surprised if I ended up writing other novels someday, though,” she said.

She said she has her sights set to major in Environmental Studies in college and later study Environmental Law in law school which is where her true passion lies in protecting nature and the environment from exploitation.

Elle said she plans to donate a portion of her proceeds to a tiger charity. “I’ll probably end up saving the rest to help with college expenses, but I’m tempted to buy some fancy new sneakers as well!”

Her book is on sale now through Amazon although it has a release date of August 15. She has several book signing events on the horizon.

Elle was asked what advice she would give to young readers. “Don’t ever be afraid to try because you fear you’re too young or inexperienced to make a difference. The world needs courageous and persistent people who will step up and enact the changes they wish to see. Take that step; you won’t regret it.”

It seems that Elle can now add “difference-maker” and “inspirational” to her list of accomplishments as well.