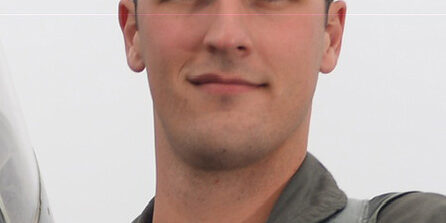 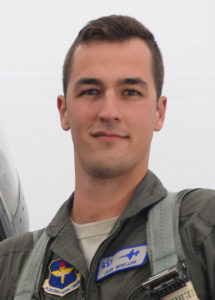 Jack Moeller, Geneva Class of 2013, is the highlighted alumnus for this quarter. Here are his responses to a standard set of questions which will be given to an alumnus to answer each quarter.

Please give a current update on yourself (college/graduation year, major, work/career, family, other interests, service or hobbies).
I am currently a pilot in the Air Force at Introduction to Fighter Fundamentals. Currently I fly the T-38 Talon and IFF is part of my upgrade training to fly the F-16 Viper which I will begin flying in September. I studied mechanical engineering at the University of Virginia with minors in computer science and English literature and graduated in 2017. I am still single and outside of my work enjoy photography and reading.

In what ways did your Geneva education/training prepare you for the work you are doing now?
My training and school since Geneva has been mostly professionally oriented. That is to say my follow-on education has done little to develop my ability to rightly consider this country and the world as a whole and my place in it. Geneva allowed me to put the skills I have learned, my current work and the way God uses me on a daily basis, in a larger perspective. It developed a base set of critical thinking skills and desire for higher universal truths which combined have allowed me to develop a logically consistent worldview. Without such a worldview, and the trust in God which is its end result, I could not have found the purpose and motivation to reach where I now am. It is the same trust in God, and the strength he provides, which motivates me daily.

Please describe the most significant value you learned from Geneva.
The most significant value I learned from Geneva is the conviction that no man may rightly judge another. Today people hate those with whom they disagree. As a result, calm rational discussion about contentious issues (abortion, gun rights, President Trump), is nearly impossible. Geneva taught me to separate ideas from people, and that God alone possesses the authority to judge and condemn men.

How would you encourage a Geneva Rhetoric School student to make the most of their Geneva years?
Focus on the core classical curriculum and dive into it with everything you have. You likely will never have the chance again to learn logic, rhetoric, history and worldview the way you can at Geneva. I know Geneva may not have some of the practical opportunities, like sports and AP classes, that large public schools have. That stuff is really not important in the scheme of things. You will have plenty of time to focus on the practical things later in college and beyond and you will never again have the chance to develop your core critical thinking skills and worldview like you do at Geneva. Even if you major in one of the liberal arts, colleges teach them in a much more academic way and rarely ask the crucial questions about whether a text is right or wrong, or how it ought to impact your view of the world. So develop your critical thinking skills, learn to argue both for and against your own viewpoints and the opposing ones. Apply those skills to developing a consistent worldview and make sure your opinions on the issues of the times are consistent with that worldview. Also do debate. It ties together the skills learned at Geneva like no other experience I’ve had and will allow you to test your argumentation skills and thought processes against really smart people with very different backgrounds.

Describe Geneva in one word. Explain.
Fundamental. Definition: forming a necessary base or core; of central importance. I offer the definition because out of several I read this one is the closest to my intended meaning. The core classical Christian curriculum at Geneva, the way I experienced it, offered a base understanding, a perspective, and a skill set  which is centrally important to remain grounded as a thinker, doer, leader, and follower of Christ in today’s society. Geneva may not be the only way to acquire it but I am convinced that all other means are far more difficult and many forces in the world will fight to keep it out of reach. Once acquired, however, it serves only as a starting point. It must be developed for a lifetime.

Please share one or two of your Geneva extracurricular activities and then contrast that with one or two of your current non-work activities.
Debate. It taught me to argue well and logically. The biggest problem is that arguing well and logically is not persuasive in daily life. In fact, most are likely to dislike you if you attack closely-held beliefs as if you were in a debate round. I love conversing about politics and other divisive issues but have found that it is much better to simply listen to other people’s opinions and offer an explanation of your own only when asked. It took me several years after Geneva to learn that. In fact, I’m still learning it.

What are your future career goals and how do you feel prepared for them? How has Geneva been a thread that has connected you to your work now and what you see yourself doing in the future?
One day I hope to hold a leadership position in this country. Whether that is in the military as a general officer, in politics, or in some other way that God hasn’t even led me to consider, I do not know. What I do now as a fighter pilot is almost entirely technical. It’s all about how to fly airplanes and employ weapons. Geneva gave me a hunger for the bigger picture. There are several layers between the highest leaders in the nation creating policy objectives and the F-16 that drops a bomb on a target. As I progress through my career, and my own job becomes more abstract, I hope that hunger will allow me to build a strategic and policy-oriented perspective which will equip me one day to reach my goals and serve well as a leader.

How are you impacted by being in graduate school? What is something you have learned/are learning about yourself and God’s world?
God has given me the privilege of seeing beauty while flying unlike anything I ever saw while standing on the Earth. His creation is truly awesome. He also gave man the ability to build machines capable of doing things that seem like they should be impossible. My job has given me a new appreciation for God’s awesomeness and grandeur. My job is also all about killing people. That, after all, is the purpose of the military. Human life is sacred but war is necessary. I have yet to kill for my country, but I have tremendous reverence for what God has called me to do in that regard. Fighter pilots see a unique combination of beauty and death which parallels God’s perfect creation corrupted by sin. On another hand, I know I am exactly where God wants me but that I did nothing to get here myself. God has shown me time and again that I am not capable of anything when relying on my own strength. It is only by His grace that I fail in my daily rebellions against Him just enough that He can still work through me to accomplish something in this world.