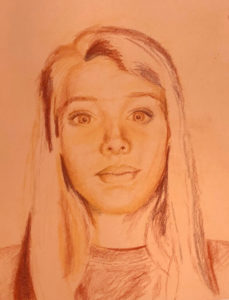 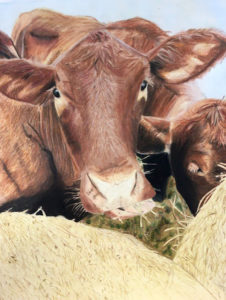 Julianna’s piece is titled “Hay You.”

Geneva high school art students competed in the Region 20W VASE (Visual Art Scholastic Event) Contest at Stevens High School in San Antonio recently. All four Geneva students who participated in this contest received the highest marks. These students were Sophia Baldwin, Alexa Georgelos, Julianna Goodman and Quincie Hartman. The art created by Sophia and Julianna are among the approximately 200 pieces that will advance to the VASE State Contest in San Marcos on April 25.

“This art competition is comprised of mostly public school entries from the San Antonio and Hill Country area, so it was a much more expansive contest than the TAPPS competition which is limited to only private and parochial schools from around the state,” Geneva Rhetoric School art teacher Cathy Lester said.

The mission of the Texas Art Education Association VASE Contest is to recognize exemplary student achievement in the visual arts by providing art students and programs a standard of excellence in which to achieve.

“VASE is a very large, mostly public school contest where the top 10 percent proceed to state. I am thrilled that our students were able to compete so favorably against other much larger schools,” Lester said.