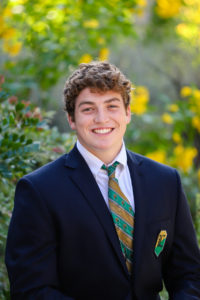 What is your favorite or funniest moment at Geneva?
My favorite moment was winning the State championship in football. The bus ride home was also filled with some of the funniest moments that I’ve had while at Geneva.

What will you miss most when you leave Geneva?
I will miss the loving community that Geneva has surrounded its students with.

What does being a Geneva student mean to you?
To me being a student at Geneva means always putting God first while also striving for excellence both inside and outside the classroom.