Can a Geneva Graduate Change the World? 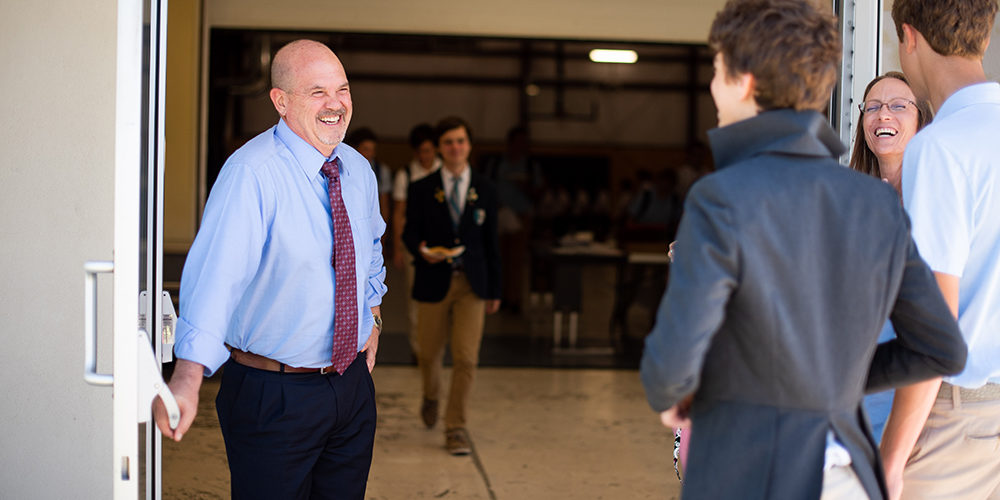 A Geneva graduate is a disciple of Jesus Christ, exhibiting excellence, passion and integrity as he leads for Christ’s cause in the world. He is a critical, logical thinker, able to discern absolute truth from cultural trends and philosophies. As one who loves the Lord with all his mind, the Geneva graduate will be a lover of learning, and have the ability to grasp new ideas throughout his lifetime in pursuit of truth. These qualities, clothed in humility, create a foundation that will enable him to present engagingly articulate and persuasively winsome arguments. A Geneva graduate honors God’s image within himself and thus, is interested in all people because of God’s interest and image in them. The classical education and biblical worldview gained at Geneva will equip the graduate to exhibit vocational excellence to the glory of God.

Regarding the overall portrait, the first thing that you need to notice is that this statement is incredibly lofty. Indeed, it is beyond anyone to fulfill at all points at all times. This, however, is intentional. We know that none of us will measure up completely, but the high target will help to insure that we never settle or become complacent in our striving.

Secondly, you need to notice is that the portrait mentions nothing about college admission or what kind of college our students will or should attend. I think all of us know that Geneva is indeed prepping students for success in college and that our students will shine at whatever schools they attend, but that is not the primary goal. That is merely what happens along the way.

Finally in regards to the portrait as a whole, notice that none of the lofty goals in the portrait is quantifiably measurable. That is, they are all beyond the evaluative language of mathematics. There is no standardized test to measure whether this portrait is achieved. Rather, the lives, influence, and legacies of our graduates will dictate whether we are hitting the goals at which we are aiming.

Now to the first sentence: you should note that our portrait begins by identifying a Geneva graduate as a disciple of Jesus Christ. This priority and wording are intentional. The word used most in the New Testament to identify believers is “disciples;” “Christians” isn’t even in the top three (1. disciples 2. elect 3. saints). Discipleship is not an optional extra for followers of Christ; it is a description of following Christ. As such, we hope our graduates are disciplined followers (disciples) of Christ and that what we do here encourages this high calling.

After identifying a Geneva graduate as a disciple of Jesus Christ, there is a further call not only to follow Christ as a disciple, but to lead for Christ in the world. Of course, Christian leadership begins with servant-hood, so the goal of creating leaders is actually a goal to create servants—not slaves of the world, but those who are willing to put others first in representing Christ to the world. With that in mind, it is easy to see why excellence, passion, and integrity are necessary for a Geneva graduate. None of this, however, is merely taught and learned by rote. These things are primarily learned from the example that administrators, teachers, and parents provide in daily interaction with the students and each other. Indeed, all play a part every day in molding graduates who exemplify this first sentence. When we place others in the Geneva community before ourselves and serve one another, we are on our way to producing what we expect our students to be.

Now let’s move to sentences two and three. In a culture that advocates relativism, a disciple of Christ must be equipped with the tools of clear thinking because Christians cannot jettison the notion of absolute truth. Jesus declares that He is “the Way, the Truth, and the Life,” and thus, as Peter Kreeft argues, “What we do with the truth, we do with Christ.” Therefore, the methodical and often difficult process of training young minds to think well must not be abandoned. Humbly pursuing truth is not merely a way of loving the Lord with all of one’s mind, it is loving the Lord with all of one’s mind.

Thus, it is hoped that a Geneva graduate is not merely a good test-taker, but a good thinker. If a student does her best with the intellectual equipment she’s been dealt, yet graduates with a C average, but is never the less able to think well and critically, then she will be a Geneva success. By the same token, if a student graduates with a perfect 4.0 GPA and perfect SAT scores, but merely sees learning as a means to an end and never bothers to deeply consider the truth and his relationship to it, then he is just another high school graduate.

Building upon the ability to think well, sentence four goes a step further and expresses that a Geneva Graduate should also be one who can persuade well. Of course, this is not just so he or she can experience the thrill of winning an argument, but for the purpose of championing the truth. If we are not careful, we can lose our awe for the power of words. God created by His word, He gave Israel the Ten Words to guide them, and in Christ the Word became flesh. Knowing this, the Geneva graduate should be adept in the use of words, wielding them wisely in order to cut through our culture’s manipulative jargon and sloganeering to once again kindle the spark of thoughtful persuasion in service to the Truth. Probably one of the most distinctive aspects of a Geneva graduate will be his or her rhetorical skills, skills which are slowly being lost or marginalized in our culture.

As sentence five makes clear, pursuing truth, thinking well, and articulating clearly are wonderful traits, but if these are separated from the human element, then our graduates are liable to resemble Pharisees or pedantic robots. Harkening to the opening sentence, part of being a disciple of Christ is learning to see people as He sees them, as beings of intrinsic worth because they are God’s image-bearers. For our graduates, honoring this worth and image in themselves is manifested in doing their best with what God has given them. This same honor is manifested towards others through seeking the best in and for them and helping them also to do their best. Indeed, this sounds like a good definition of “love,” one of those things we can do because we are created in God’s image.

The final sentence of the Geneva Portrait of a Graduate makes plain that we are not aiming our students towards any one vocational calling. Rather, it is our hope that the type of person a student becomes will fit him for excellence in any calling. It is our further hope that Geneva graduates will understand that any honorable pursuit can be accomplished to the glory of God: from CEO to stay-at-home mom—from garbage collector to symphony conductor.

To conclude this exploration of the Portrait of a Graduate, it is worthwhile to note few things from an article by Paul Maurer found in an issue of Salvo magazine. The article, entitled “Hollowed Halls,” begins with the following paragraph:

“Not long ago, Richard Levin, the president of Yale, did a remarkable thing. He expressed the hollow core of secular higher education in extraordinarily honest language. While speaking to incoming freshman and their parents at Yale’s orientation, Levin confessed that the $200,000 [much more now since this article was first printed] Ivy League education they were about to purchase would not help them with the most important part of an undergraduate education–discovering the meaning of life.”

Knowing that this is the case at many schools, the necessity of our Portrait becomes even more evident. Later in the article, Maurer gives a description of the type of school we hope Geneva will remain. We allow his words to close this exploration of the Portrait:

“These Christ-centered schools [like Geneva] believe that education is more than the transmission of knowledge and professional training. While they take academic rigor seriously and graduate highly employable students, they also, as during the age of piety, set out to shape the souls of their students. At such [schools], the educators seek to develop a certain kind of person for church and society.”