At Geneva School, we adhere to classical methodology. A classical and Christian education is essentially a liberal arts education that strives to meet the ancient Roman ideal of equipping men and women to function as free men and women in the service of God. The Bible commands all Christians to worship God with our minds and to be good stewards of the talents and abilities with which He has created us. Accordingly, we focus on providing an education that is varied, rich and challenging to the advanced student while still accessible to the average student.

Classical educational methodology is based upon the trivium (Latin for “the place where three roads meet”) which was first articulated in the early middle ages and is carefully tailored to the predictable developmental stages of the student. Rhetoric is the third stage of the trivium.

The Rhetoric School, serving students in ninth through twelfth grades, builds upon the Grammar School foundation of fundamental skills and facts and the Logic School development of critical thinking skills. With these basic knowledge-building skills, students are taught logic and advanced rhetoric in order to clearly, eloquently, respectfully and persuasively communicate their thoughts both orally and in writing. Students study a modern Romance language or continue with Latin; mathematics through calculus; all of the foundational sciences including biology, chemistry and physics (offered as AP courses); history, government, fine arts; and the Western Canon engaged from a biblical worldview.

In all three stages of the trivium, students study works that have withstood the test of time. Subjects are integrated across disciplines and students study complete literary works instead of textbooks comprised of literary excerpts. Our goal is to develop in our students a life-long love of learning and the mental habits necessary to develop mature, logical, and biblical thinking.

The houses in the Rhetoric School are named after four individuals who greatly influenced the modern classical and Christian school movement:

Chaucer House – named after Geoffrey Chaucer (d. 1400), philosopher, scholar, translator and poet/writer. Most famous for The Canterbury Tales, he is often called the father of English literature because he pioneered the use of English instead of Latin as a medium for literary art and as a means of scholarship. Chaucer: Champion of the English Language.

Lewis House – named after C.S. Lewis (d. 1963), author, literary scholar and Christian apologist. He is probably best known for his children’s classic The Chronicles of Narnia, but he is widely regarded as the most influential Christian voice of the 20th century. His works on the Christian faith continue to show Christianity’s relevance in the worldwide marketplace of ideas. Lewis: Champion of the Christian Worldview.

Milton House – named after John Milton (d. 1674). A writer of often quite fiery theological argument and political activism, he is best known for Paradise Lost, a retelling in classical epic form of the story of the fall of man. This combination of the epic form and biblical material has rendered Milton’s Paradise Lost one of the foundational works of western culture. Milton: Champion of the Biblical Epic.

Sayers House – named after Dorothy Sayers (d. 1957), author, playwright, theologian and translator of Dante’s Divine Comedy. Perhaps best known for her Lord Peter Wimsey mystery novels, she is also the champion of the classical Christian education movement. Her 1947 Oxford address entitled “The Lost Tools of Learning” spawned what we see today as the resurgence of the classical method. Sayers: Champion of the Classical Method.

These are all the books Rhetoric school students will read in the 2022-2023 school year. 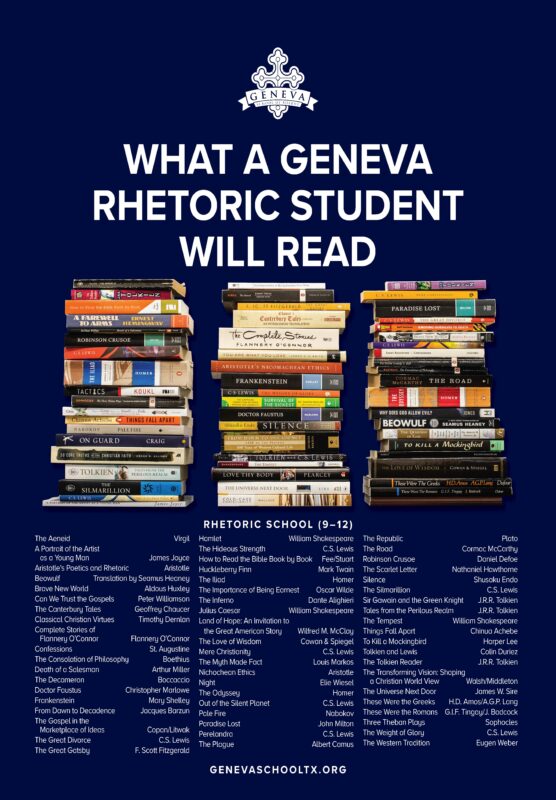