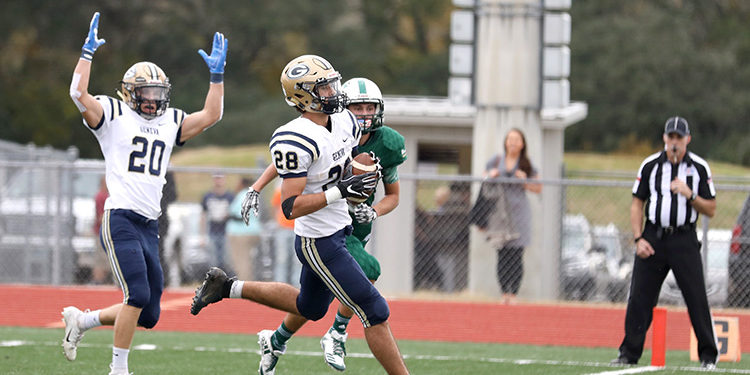 The Eagles varsity football team defeated The Woodlands Christian Academy to advance to the TAPPS Division 3 State Semifinal Game. The semifinal game is against League City Bay Area Christian on Friday, November 30 at 7pm at the Giddings ISD Buffalo Stadium in Giddings, Texas (1600 N. Main Street Giddings, Texas 78942). Tickets are $8 for students and $13 for adults. (No Booster Club passes will be accepted.)

The game will be broadcast on the Texas Sports Radio Network beginning at 6:30pm. Go GSB!

Senior running back Devon Ahrens (28) is shown above as he scores one of his four touchdowns as teammate Easton Myrick (20) celebrates in the Eagles’ 47-19 victory over The Woodlands Christian Academy.