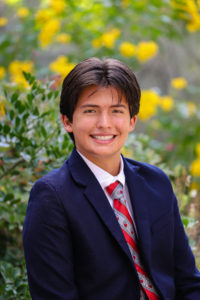 What is the most influential book you have read besides the Bible? Why?
The Odyssey, because it shows the hardships that one has to overcome to reach a goal of any kind.

What is your favorite or funniest moment at Geneva?
My freshmen year the choir had to sing the national anthem for the school’s homecoming game. However, Mr. Vis queued us to walk in really late. And when I say really late, I mean, REALLY, REALLY LATE. We walked out to the field with complete silence falling over the entire crowd, but the only thing you could hear were the little *cling* *cling* noises coming from the cowbells on our mums and garters.

What will you miss most when you leave Geneva?
Probably the one on one interaction the teachers have with you, ranging from the ability to come in at any time to ask for help with Mrs. Greenlees or going to Mr. Johnson’s door early before class to steal his name tag.

Who has influenced you most while at Geneva, How?
Mr. Milam has influenced me the most while I’ve been at Geneva. Whether it’s in debate talking about a new topic or just playing chess with him, he has taught me to think things through before doing.

What does being a Geneva student mean to you?
Being a Geneva student means living up to the standard when you go to the corner store and an little lady comes up to ask you “Where do you go to school?” indicating that she has never seen anyone in the Geneva school Monday attire, and respond “Geneva.” She then answers back saying, “I love y’all over there, y’all are respectful to anyone and care about the community so much. Thank You.”

How would you encourage a Geneva kindergartner to persevere?
Have little interactions with your teachers every day, whether they be funny interactions or do something kind for them. It lightens the load of stress you may have during school.

What about Geneva do you hope never changes?
I hope that Geneva never changes the way they teach their students such as round table discussions.