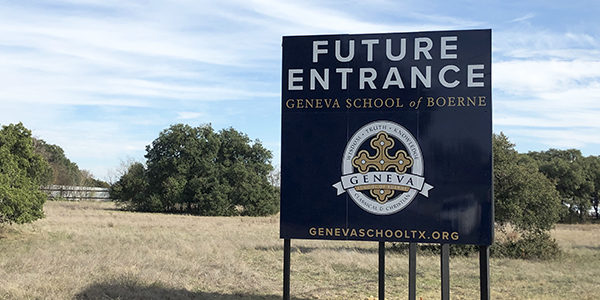 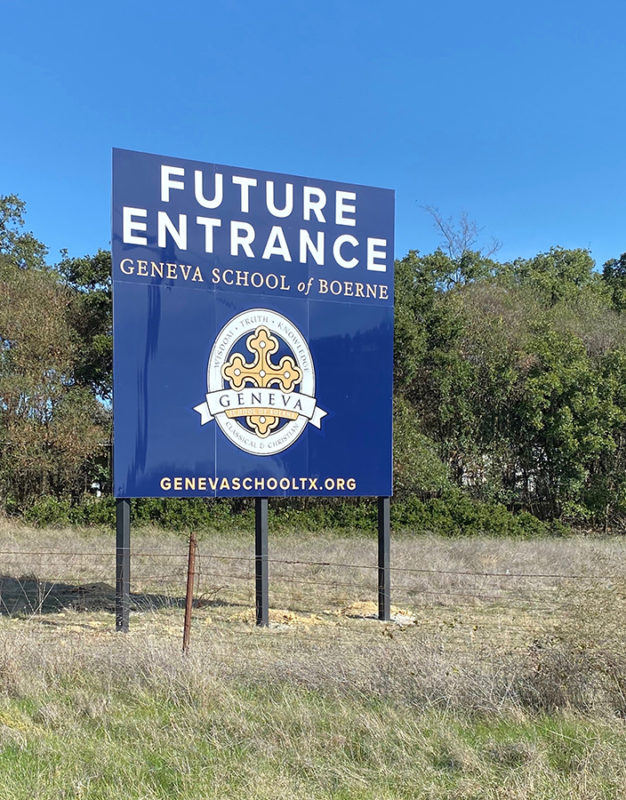 Geneva purchased an additional 19 acres of land with IH-10 access which adjoins the current 32 acres to increase the campus footprint to a total of 51 acres. This purchase allows the K-12 classical and Christian school to think on a larger scale about the overall design of the growing campus.

“With the explosive growth Boerne and the surrounding areas are experiencing along with the continued need to expand programs and offerings on the campus, we realized that acquiring property that adjoins our campus was only going to get more difficult and more expensive. Through prayer, patience, some hard work and the Lord’s hands, we were fortunate to add land that is not only perfectly contiguous with the campus but also gives us an access point to IH-10,” Geneva parent and Board of Trustees member Jim Guy Egbert said.

The school leadership developed a 30-Year Master Plan for the anticipated programming needs for Geneva in a way that maximizes the use of the school’s land. These programming needs include opening access to the campus from IH-10, building permanent classrooms for Logic and Rhetoric Schools, expanding the fine arts facilities and adding athletics facilities and parking.

“You can look from every angle of the campus and see either new rooftops or some type of commercial development being built. I feel confident that the families and students that attend this school 10 years from now will be so grateful that we were able to expand the campus,” Egbert said.

“The school leadership is currently working to raise the funds to pay for the land. Once the land is paid for, we will work on opening the access to IH-10 and building more parking,” Head of School Brad Ryden said.

The current projected model of the school shows Geneva maxing out at 800 students in grades K-12, which allows for about 60 students per grade level. “We believe this number allows for many choices with programs in academics, arts and athletics while not being so large that we lose our sense of community which has become a hallmark of our school,” Ryden said.

Ryden added that once the land is paid for, the school will work to open access to IH-10. “A few weeks ago, we put up a sign out on the access road to show our community where that entrance will be. We also had undergrowth cleared out on the new property. The next step will be to build a fence,” he said.

Geneva is celebrating its 20th anniversary this year and will graduate its tenth senior class in May 2020. The school began in 1999 with 13 students in borrowed classrooms at St. John Lutheran Church in Boerne. Geneva purchased 32 acres in 2004 and moved to its current location at 113 Cascade Caverns Road where its student population has grown to a current enrollment of 690 students in K-12.

The school is known for five core distinctives—it teaches from a Christian worldview, upholds the classical ideals of truth, beauty and goodness, has deeply-invested teachers, fosters a tight-knit, engaged culture and values a commitment to excellence in all things. Geneva challenges students to lead as servants, scholars, athletes and artists.

Geneva high school students compete in the Texas Association of Private and Parochial Schools (TAPPS) 4A division for academic, athletic and fine arts competitions throughout the school year and won the Henderson Cup Award as the best overall school for the past two years in the TAPPS 4A classification. It will move to compete at the TAPPS 5A level for the 2020-21 school year.