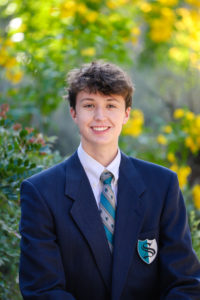 What is the most influential book you have read besides the Bible? Why?
The most influential book I’ve read at Geneva is most likely Silence by Shusaku Endo. This book was an eye catcher from the first page and managed to keep my attention; if a book can do that for me, then I really like it. It also really made me aware of the trials and tribulations that Christians had to face in the days before religion could be freely discussed and makes me glad that I live in a time where we can be open about our faith.

What is your favorite or funniest moment at Geneva?
There are so many hilarious moments at Geneva that I’ve witnessed but sadly I don’t remember them all. One that I do remember and really like was before school started one morning Brandon Strickland pulled out a Beyblade arena and offered to duel people. Of course, all the guys that were around immediately flocked to the arena and went crazy when even the slightest thing happened. Definitely one of my favorites.

What will you miss most when you leave Geneva?
When I leave Geneva, I will 100% miss the small school aesthetic. Knowing everyone is so nice and I can reside in the fact that I would be able to have a conversation with anyone if they chose to start one. Additionally, I’ll miss the way Mr. Shelton and Mr. Graham are able to joke around during assemblies. I felt a lot more comfortable around them as authority figures when they used their sense of humor a lot.

Who has influenced you most while at Geneva, How?
Out of all the people, I think Mr. Arizpe influenced me the most. I may not have had much time with him in class, but he definitely made the biggest impact on my not just in the way he showed respect to others, he also cared so much for people that weren’t even his family. I feel like I could go and talk to him about anything. In fact, I did do that, him and I went to Whataburger before a play and we just sat, ate, and talked like two old friends. We each listened to each other and understood. That could also be another one of my favorite moments, but it wasn’t on campus so I’m not sure if it counts.

How would you encourage a Geneva kindergartner to persevere?
I would tell a kindergartner to keep going because while it may seem dull at times, the end result is worth its weight in gold. Being prepared out of high school is a task many public and even some private schools fail to do, but Geneva does it immaculately. Keep going, you will thank me later.

What about Geneva do you hope never changes?
I hope the small school feeling of Geneva never changes. Like I said above, it’s so nice to be able to know everyone and actually not feel alone in the place you spend 8 hours a day, 5 days a week. One more thing: keep all the fun days and celebrations; it is nice to have a break from the work every now and then.